American Warehousing through the Eyes of John Oliver 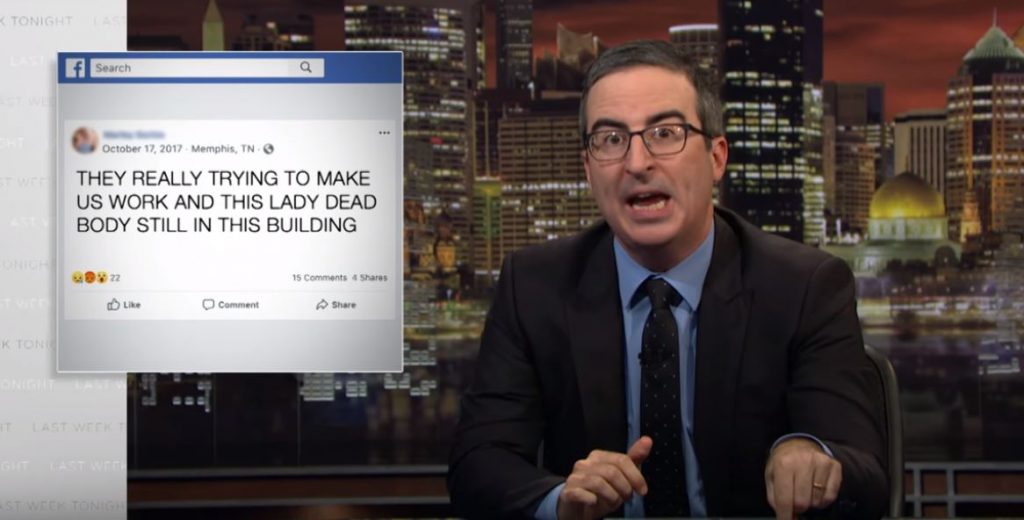 On July 1, John Oliver’s Last Week Tonight tackled the American warehousing industry and discussed issues faced by many warehouse workers. As Oliver shows, today’s trends in warehousing and logistics are often most harmful for employees at the bottom of organizational hierarchies, which also results in headaches for their employers.

You can watch John Oliver’s full report here (of course, it is quite entertaining).

Oliver indicated that firms like Amazon and Walmart face more pressure than ever to fulfill orders quickly. The rise of overnight shipping produces tremendous organizational stress, which ultimately filters down to warehouse staff.

One Amazon executive featured in the video stated that the company must deliver overnight packages “at any cost.” Likewise, a video distributed to Amazon warehouse managers—and later leaked—stated that the business model is based on consumer obsession, resulting in a need for rapid fulfillment. Oliver called Amazon the “Michael Jackson” of shipping and explained how its policies drive similar practices at other firms.

The implications of overnight shipping include “razor-thin margins” and the prioritization of removing inefficiencies. Oliver gave the example of Walmart discovering that changing the type of step-stool used to square packages in trucks could save Walmart $30 million per year.

While strong purchase loyalty loops and lightning-fast supply chains are necessary for large businesses to remain competitive, these necessities have negative ramifications for workers.

Oliver reported that injury and illness rates in warehousing are higher than coal mining, construction, and logging. The harsh work conditions imposed upon workers have contributed to these high rates of injury, which are worsened through lackluster training and other preventable factors.

Throughout the report, Oliver cites testimonies from former Amazon employees who stated that using the restroom was nearly impossible during the work day. Others told stories of walking up to fifteen miles during a ten-hour shift. YouTube comments from those claiming to be former warehouse workers substantiate these stories.

Amazon is not alone in unsafely pressuring employees and thereby creating poor conditions. In one extreme instance highlighted by Oliver, an employee at a leading logistics firm complained of chest pain and requested an extra break, which her manager refused. The woman later collapsed and died, yet managers told employees to work around the dead body and continue filling orders.

Poor working conditions in warehouses lead to employee turnover, which is reaching record highs in the United States. Turnover costs large companies billions of dollars each year—costs that are often a result of avoidable factors like inefficient allocation of workloads, poor management, and scant opportunities for career advancement.

Companies like Amazon can ease the burden of their warehouse workers by collecting anonymous feedback, which ensures that employees feel heard in the workplace.